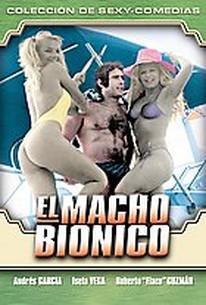 Actor turned director Rodolfo De Anda's farcical sci-fi-comedy was based on Mauricio Iglesias' novel, El Amor Es una Farsa, although the laughs aren't as pointed or frequent. Andres Garcia toplines as a man with surgically enhanced super-strength (the title clearly an effort to capitalize on the international success of The Six Million Dollar Man). Despite his gifts, poor Garcia is still a flop with the opposite sex and he goes to ridiculous lengths -- including posing as Count Dracula -- to reverse his romantic fortunes. Familiar genre faces along for this very silly ride include Isela Vega, Roberto Guzman, and Rafael Inclan. De Anda went on to direct the overwrought La Carcel de Laredo before deciding to keep concentrating on his acting career. ~ Robert Firsching, Rovi

There are no critic reviews yet for Macho Bionico. Keep checking Rotten Tomatoes for updates!

There are no featured audience reviews for Macho Bionico at this time.