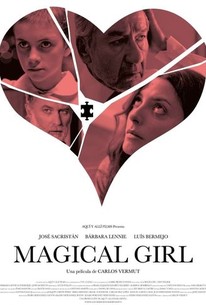 An unemployed father seeking a gift for his dying daughter, a disturbed woman with a dark secret, and a retired math professor find their fates bound together by tragedy in this thriller from emerging Spanish director Carlos Vermut (Diamond Flash). Luis' (Luis Bermejo) daughter is dying from leukemia. Though Luis' friends assure him that the best thing he can do for her is to be by her side, all the anguished father wants is to buy her the expensive dress inspired by her favorite anime character, "Magical Girl Yukiko". One night while preparing to burglarize a local jewelry store, Luis encounters Barbara (Barbara Lennie), a beautiful woman whose acute mental illness is eroding her marriage to a successful psychiatrist. Desperate, Luis blackmails Barbara for the money he needs to buy the dress. Though Barbara gets the money, she suffers agonizing pain and humiliation in the process. Later, clinging to life, Barbara calls on her former math teacher Damian (Jose Sacristan), now an aged ex-con to seek violent retribution. Damian has always feared the day he would hear from Barbara again, and now that day has come, plunging all three into an inescapable world of darkness.