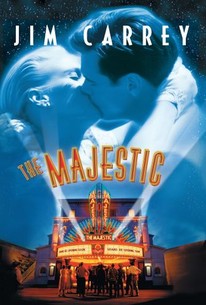 Ponderous and overlong, The Majestic drowns in forced sentimentality and resembles a mish-mash of other, better films.

Hollywood screenwriter Peter Appleton, a staff writer at HHS Studios in 1951, is an ambitious up-and-comer. His first produced screenplay, a B movie swashbuckler entitled "Sand Pirates of the Sahara," has just opened on a double bill with John Huston's adventure, "The African Queen," at Grauman's Chinese Theater on Hollywood Boulevard. Not only is Appleton enjoying professional success, he has a hot starlet girlfriend, Sandra Sinclair, the female lead in his big screen debut. However, life is full of 'what if's...' What if Appleton were suddenly targeted by the House Un-American Activities Committee for suspected Communist leanings uncovered during his college years? What if Appleton lost not only his job and his girl, but his identity as well in a serious car crash in which the young writer developed amnesia? What if Appleton, unsure as to who he really is, stumbles into a charming little town on Northern California's coast and is mistaken for one of the town's long lost World War II heroes?

Cliff Curtis
as The Evil but Handsome Prince Khalid

Mario Roccuzzo
as Jerry the Bartender

Scotty Leavenworth
as Boy on Beach

Grant Vaught
as Boy on Beach

Ginger Williams
as Louise
View All

News & Interviews for The Majestic

Critic Reviews for The Majestic

Audience Reviews for The Majestic