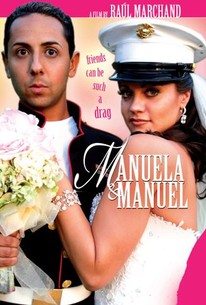 A transgendered cabaret artist switches gender again to help out a friend in this comedy of errors from Puerto Rico. Manuela (Humberto Busto) was born a man but has always felt more comfortable as a woman, and has been living as a female for years. Manuela makes her living singing in a San Juan nightspot, but lately she hasn't felt very celebratory since a bad breakup with her boyfriend. One day Manuela gets a visit from her good friend Coca (Elena Iguina), who is in a panic -- she's just discovered she's pregnant, which will enrage her father (Emmanuel "Sunshine" Logroño), a staunchly conservative member of the military. Coco needs someone to pose as her fiancé as she breaks the news to her dad, and she begs Manuela to put on her former male persona and pretend to be the father of her child. Despite her deep misgivings, Manuela agrees, but finds that switching back and forth between her masculine and feminine sides is far more difficult than she expected. Manuela y Manuel received its American premiere at the 2007 American Film Institute Festival, where it was screened as part of the "Latin Showcase" program.