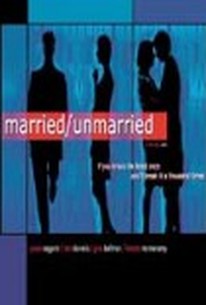 Four people bare both their bodies and their souls in this dark and emotional drama. Paul (Paolo Seganti) and Amanda (Gina Bellman) are a married couple who, after less than a year together, feel that their relationship is falling apart. Their friends Danny (Ben Daniels) and Kim (Kristen McMenamy) are not demonstrably happier together, though they indulge in a wide variety of sexual experimentation to blot out their ennui. One evening, the two couples get together, and over the course of a few hours they discuss their romantic disappointments, their sexual needs and longings, and the lingering dissatisfaction they feel with their lives. Married/Unmarried was the first directorial project for British playwright Noli, who adapted his screenplay from a pair of his own plays. ~ Mark Deming, Rovi

There are no critic reviews yet for Married Unmarried. Keep checking Rotten Tomatoes for updates!

There are no featured audience reviews for Married Unmarried at this time.