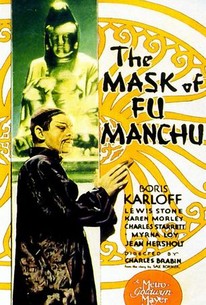 The Mask of Fu Manchu

The Mask of Fu Manchu Photos

Boris Karloff stars as the villainous Dr. Fu Manchu in this wild and wooly -- and wildly racist -- adventure yarn, based on Sax Rohmer's fiction about the personification of the "yellow peril." Sir Nayland Smith (Lewis Stone) of the British Secret Service recruits Sir Lionel Barton (Lawrence Grant) to lead an expedition with Prof. Von Berg (Jean Hersholt) and McLeod (David Torrence) to the Gobi Desert, to find the tomb of Genghis Khan and retrieve the scimitar and golden mask held within. To Barton, these are mere archeological trophies, but Smith has learned that Dr. Fu Manchu also has his designs on them; and if he gets hold of these artifacts, he will use them to cause a rising in the East, and foment a war for the destruction of the white race. The action is fast and furious, resembling a Saturday-morning serial, as Barton is kidnapped and brought to Fu Manchu, who proceeds to torture him to find the location of the tomb. Barton's daughter, Sheila (Karen Morley), replaces her father to guide the expedition, accompanied by her fiancé, Terry Granville (Charles Starrett). They find the tomb and retrieve the sword and mask, and find themselves in the company of Nayland Smith as they try to return to England, and surrounded by enemies on all sides. One man is dead and soon Terry is in the hands of Fu and his sadistic daughter Fah Lo See (Myrna Loy), who proceeds to torture him; Nayland Smith is slowly being lowered into a pit of crocodiles, Von Berg is trapped between moving spiked walls, and Sheila Barton is about to be sacrificed as part of the ritual in which Fu will declare himself the reincarnation of Genghis Khan.

Critic Reviews for The Mask of Fu Manchu

Audience Reviews for The Mask of Fu Manchu

The Mask of Fu Manchu Quotes