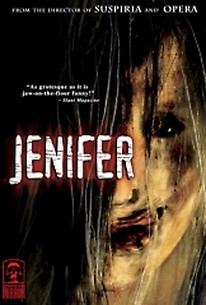 Dario Argento's contribution to the first season of Showtime's Masters of Horror, Jenifer is based on a story by Bruce Jones which appeared in Creepy Magazine and illustrated by the legendary Berni Wrightson. Steven Weber, who wrote the script, also stars in the episode as Frank, a depressive cop who has a life-changing encounter one fateful afternoon. He comes upon a man (Kevin Crofton) brandishing a meat cleaver, who looks like he is about to murder a young woman. When Frank draws his gun and orders the man to stop, the man refuses. "You don't know what she is," he tells Frank, pleadingly. "You have no idea." Frank is forced to shoot the man to save the young woman (Carrie Fleming), who turns out to be hideously deformed from the neck up. She also can't speak, but appears very grateful to Frank. Frank goes home to his wife, Ruby (Brenda James), and his son, Pete (Harris Allan), but he can't get the deformed woman off his mind. The next morning, he finds out that the dead man's family won't claim him, and that he had a note that read "Jenifer" in his pocket. He finds out the woman was brought to the mental hospital at Watkins Island. He goes to visit her, and when she sees him, she races out of the shower to tearfully embrace him. Unable to leave her in such a place, he brings her home. Ruby is horrified, and Pete is inappropriately amused. "She's awesome," he exults. "She's got a great rack...for a Morlock." Threatened, Jenifer bites Ruby and runs out of the house. Still, Frank cannot get past his obsession with her, and things only get worse when she eats the family cat. But Frank strangely finds himself willing to sacrifice everything to protect the strange girl.

Mark Acheson
as Side Show Owner