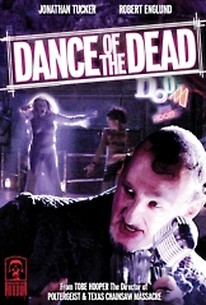 An innocent young woman is lured to the dark side, and discovers the wholesome, sheltered life she led before was rooted in betrayal and deceit in Tobe Hooper's installment of Showtime's Masters of Horror series, Dance of the Dead. In the not-so-distant future, a potent terrorist weapon called "Bliss" has destroyed America's major cities. Peggy (Jessica Lowndes) lives in a small town outside the corrupted metropolis of Muskeet, where she helps her mother, Celia (Lucie Guest), run a diner. Business is slow, but Celia says their father left some money for them when he died. The terrorist wars also claimed Peggy's older sister. Jak (Jonathan Tucker, from the Texas Chainsaw Massacre remake) and his buddy Boxx (Ryan McDonald) do what they can to get by. They've forcibly taken blood from an elderly couple, with plans to transport it to the city, where the MC (Robert Englund) at the Doom Room waits to use it for some nefarious purpose. They stop in the diner to get some ice. Celia can tell they're from Muskeet, and is immediately on her guard, but Peggy is intrigued, and strikes up a conversation with Jak. Jak tells her, "You are something I haven't seen in a long time," and invites her to "see the world" with him. Later that night, she sneaks out of the house and goes back to the diner, where Jak picks her up, as planned, and they head into town. "I'm not gonna let anything happen to you," Jak assures her, "except what you want." Dance of the Dead was scripted by Richard Christian Matheson, adapted from a short story by his father, Richard Matheson.