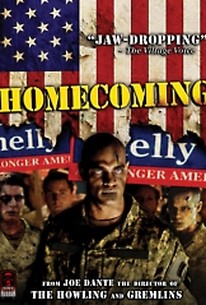 Director Joe Dante stirred up a great deal of interest in Showtime's Masters of Horror series with his bluntly anti-Operation Iraqi Freedom political satire, Homecoming, scripted by Sam Hamm. An unnamed president is running for reelection during a divisive war, and one of his speechwriters, David Murch (Jon Tenney), goes on TV to speak with talk show host Marty Clark (Terry David Mulligan) and strident right-wing sexpot Jane Cleaver (Thea Gill of Queer as Folk). Another guest is Janet Hofstader (Beverly Breuer), the Cindy Sheehan-like mother of a fallen soldier, who demands to know what her son died for. Murch gets a bit teary-eyed and explains that he lost his older brother in Vietnam. "Believe me," he tells the grieving mom, "if I had one wish, I would wish for your son to come back, because I know he would tell us how important this struggle is." Cleaver is so impressed with Murch's handling of the situation that she takes him out for a drink later, picks his brain, and eventually seduces him. The Karl Rove-like Kurt Rand (Robert Picardo) interrupts their tryst, calling to let Murch know that the president plans to make his line part of his stump speech. Well, as they say, be careful what you wish for. Soon, the soldiers killed in the war do start returning from the dead, and it doesn't go the way Murch predicted. They're not back to feast on the living, but unhappily for the president and his supporters, they just want a chance to vote in the upcoming election. "We'll vote for anyone who ends this war," one explains. The spin machine goes into overdrive, but the dead are determined to make their voice heard.