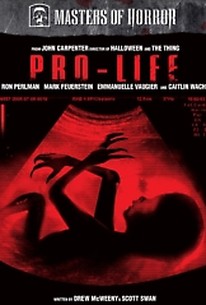 A pregnant girl trapped in a woman's health clinic makes a disturbing discovery about the child growing inside of her while attempting to fight off her father and three heavily armed brothers in director John Carpenter's second Masters of Horror episode. A young couple is driving down a darkened country road when frightened Angelique (Caitlin Wachs) darts frantically into their headlights. Realizing that the young girl is terrified beyond consolation and shaken by the near accident she caused, the kindly couple informs Angelique that they are currently en route to a nearby clinic and would be happy to give her a ride. Shortly after arriving at the clinic with their young charge, however, Angelique's enraged father, Dwayne (Ron Perlman), arrives with two sons in tow and enough firepower to stage a small war. Staunch anti-abortion activist Dwayne is determined to liberate his daughter from the evil clinic in which she has sought sanctuary, but as he prepares to storm the building, Angelique makes a horrifying discovery about her unborn child.

Derek Mears
as The Father
View All