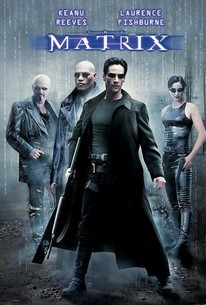 Thanks to the Wachowskis' imaginative vision, The Matrix is a smartly crafted combination of spectacular action and groundbreaking special effects.

What if virtual reality wasn't just for fun, but was being used to imprison you? That's the dilemma that faces mild-mannered computer jockey Thomas Anderson (Keanu Reeves) in The Matrix. It's the year 1999, and Anderson (hacker alias: Neo) works in a cubicle, manning a computer and doing a little hacking on the side. It's through this latter activity that Thomas makes the acquaintance of Morpheus (Laurence Fishburne), who has some interesting news for Mr. Anderson -- none of what's going on around him is real. The year is actually closer to 2199, and it seems Thomas, like most people, is a victim of The Matrix, a massive artificial intelligence system that has tapped into people's minds and created the illusion of a real world, while using their brains and bodies for energy, tossing them away like spent batteries when they're through. Morpheus, however, is convinced Neo is "The One" who can crack open The Matrix and bring his people to both physical and psychological freedom. The Matrix is the second feature film from the sibling writer/director team of Andy Wachowski and Larry Wachowski, who made an impressive debut with the stylish erotic crime thriller Bound. ~ Mark Deming, Rovi

Fiona Johnson
as Woman in Red

News & Interviews for The Matrix

100 Fresh Movies You Can Watch for Free Online Right Now
The 21 Most Memorable Movie Moments of the Past 21 Years: Vote for the Best Now!
50 F–k Yeah Moments of Female Empowerment in the Movies
View All

Critic Reviews for The Matrix

Audience Reviews for The Matrix