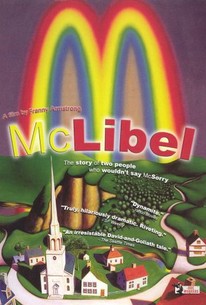 Over the course of 10 years, Helen Steel and Dave Morris are transformed from anonymous non-profit activists into unlikely global heroes, defending themselves through what became the longest trial in English history. In 1986, a non-profit group named London Greenpeace (LGP) produced a leaflet called "What's Wrong with McDonalds? Everything They Don't Want You to Know," attacking many aspects of the corporation's business practices. Morris and Steel were members of the group. Soon after the leaflets appeared McDonald's hired spies to infiltrate LGP. Under UK law, non-profit organizations are invulnerable to libel suits. The "McSpies" collected information on the identities and home addresses of LGP activists, reporting back to McDonald's, who in turn sued five of the group's members individually. McDonald's offered the individuals a stark choice: retract the allegations made in the leaflet and apologize, or go to court. With no money or legal experience, and little hope of defeating McDonald's Goliath legal team, three of the five members reluctantly backed out and issued apologies. Steel and Morris determined they would not be bullied. The pair decided to stand up to the burger giant in court and set out upon a journey that would change their lives forever. They soon became known as the McLibel 2.