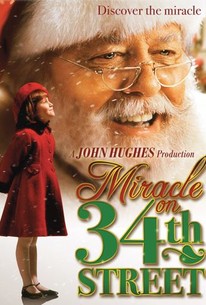 The 1947 holiday classic Miracle on 34th Street is transplanted to the 1990s with few changes in this family-oriented remake. The screenplay by the prolific John Hughes sticks close to the original outline, centering on Macy's executive Dorey Walker (Elizabeth Perkins) and her young daughter Susan (Mara Wilson), neither of whom much believes in the spirit of Christmas. Dorey is in charge of hiring Macy's Santas, including an old man named Kriss Kringle (Richard Attenborough). He does a remarkably convincing job, and he soon reveals that he actually believes himself to be Santa Claus. The authorities threaten to place the old man in an insane asylum, but a young lawyer comes to his defense. Meanwhile, Dorey and Susan find their own defenses melting and become reacquainted with the power of faith. Hughes and director Les Mayfield add a few modern touches, making Susan slightly more cynical and adding the requisite soulless corporate villains. Viewers familiar with the original may still prefer Edmund Gwenn's original Kris Kringle and consider the remake unnecessary, although the newer version reflects enough of the earlier film's spirit to prove entertaining to modern family audiences. ~ Judd Blaise, Rovi

Alvin Greenman
as The Doorman

Allison Janney
as The Woman

Peter Gerety
as Cop
View All