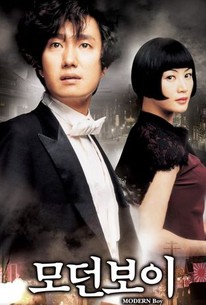 The path of a young lothario crosses with that of a femme fatale who stirs up more trouble than he ever bargained for, in Korean director Jeong Ji-woo's period romantic drama Modern Boy. Park Hae-il stars as Lee Hae-myeong, a carefree young man who spends his days waltzing through the dance halls of 1930s Seoul, with his Japanese buddy Shinsuke. They enjoy nothing more than seducing every young girl in sight. Then a mysterious and beguiling young woman (Kim Hye-soo) turns up; her name is Cho Nan-shil, but she calls herself Laura, and she exudes a bewitching aura, fully drawing Lee into her spell. After the two have gone out on several occasions and Laura/Cho has earned Lee's trust, she takes off with most of his belongings, but he persists in believing that she's fallen in love with him (and vice-versa), and that he can win her back.

There are no critic reviews yet for Modern Boy. Keep checking Rotten Tomatoes for updates!

There are no featured audience reviews for Modern Boy at this time.