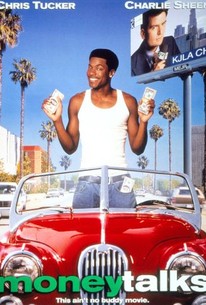 Essentially a showcase for the talents of squeaky-voiced comedian Chris Tucker, who has been compared to a young Eddie Murphy by fans, and to fingernails on a chalkboard by detractors, this action-comedy centers on the unlikely friendship that develops between a fast-talking petty con-artist and a has-been newscaster who is trying to resurrect his career and marry a young noveau-riche debutante. Though strictly small potatoes, scam-man Franklin Hatchett (Tucker) attracts the attention of the TV anchorman James Russell (Charlie Sheen) while running his latest con at a carwash. Shortly after refusing an interview with Russell, Franklin ends up jailed. He manages to escape when a transfer bus is hijacked. Handcuffed to a French jewel thief involved in the attack, Franklin is dragged along. He escapes, but his troubles are not over, for he quickly learns that he is the accused perpetrator of the hijacking. When all is said and done, Franklin finds himself pursued by the cops, the thieves, loan sharks, and an irate pregnant girlfriend. In desperation he goes to Russell and makes a deal. Russell brings Franklin to his pre-wedding party to meet his fiance Grace Ciprani (Heather Locklear). Franklin creates big trouble when he tells her father Guy (Paul Sorvino) that he is Vic Damone, Jr., son of Vic Damone and Diahann Carroll. Guy accepts this and gives Franklin a real Italian welcome. But though he may feel safe for the moment, Franklin's troubles are just beginning and before the story ends, he and the hapless Russell are involved in gun fights, car chases and a final showdown at the Los Angeles Coliseum.

Jeff Brockton
as Cop at Diner

Gary Price
as Cop at Diner

Vahe Berberian
as Cabby at Pier

Kevin Lowe
as Detective at Precinct

Rance Howard
as Reverend
View All