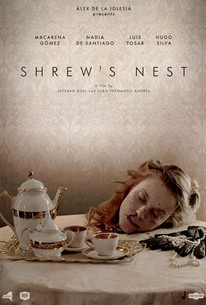 Directors Juanfer Andres and Esteban Roel team-up for this suspenseful thriller set in 1950s Spain, where simmering tensions between a pair of orphaned sisters boil over following the unexpected appearance of an injured stranger on their doorstep. When Montse's (Macarena Gomez) mother dies giving birth to her youngest sister, the devoted older sibling assumes the role of surrogate parent and the watchful eye of their stern father (Luis Tosar). Years later, their father having gone off to war and never returned, the younger sister (Nadia de Santiago) seeks desperately to break free from the single, devoutly-religious Montse, who openly resents that her pretty younger sister is being courted by a handsome suitor. When their handsome upstairs neighbor (Hugo Silva) shows up at their door badly injured and in need of medical assistance, Montse furtively brings him inside, and assumes the role of his personal nurse. But her motivations are far from benevolent, and soon it becomes apparent that Montse has no intentions of setting him free. As her younger sister seeks to help her Montse's reluctant "patient" escape, another unexpected development threatens to expose his presence, prompting the manipulative Montse to take desperate measures to ensure that both he and her sister remain precisely where she wants them. Meanwhile, a sinister secret in the halls of this home begins to emerge, leading to a desperate struggle with deadly repercussions. ~ Jason Buchanan, Rovi