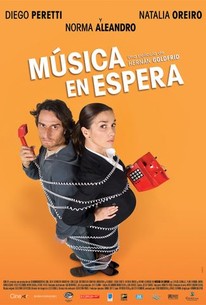 A man looking for answers from his banker gets a lot more than he bargained for in this romantic comedy from Argentina. Ezequiel (Diego Peretti) is a composer working on the soundtrack for a film, but with his deadline approaching, he's distracted by some major problems in his life -- his wife has recently left him, his finances are in sad shape, and if he can't complete his score on time, he may lose his house. While trying to get in touch with his banker, Ezequiel is put on hold, and the music played over the phone to keep him occupied is a piece that would fit perfectly into his score. Ezequiel runs to the bank in hopes of learning what music they're using on their phone system, but his timing has unexpected consequences. Ezequiel's new representative at the bank is Paula (Natalia Oreiro), who is beautiful and smart but unlucky in love; she's recently learned that she's pregnant, but with her mother due to stop by the bank and meet her boyfriend, she has to deal with the fact he's just left her. When Ezequiel and Paula's mother arrived at the same time, Paula tells her mom that he's the father of her child, which throws him into a strange and unexpected relationship at a most inconvenient time. Musica En Espera (aka Music On Hold) was the first feature film from director Hernan A. Goldfrid.

There are no critic reviews yet for Musica en espera. Keep checking Rotten Tomatoes for updates!

There are no featured audience reviews for Musica en espera at this time.