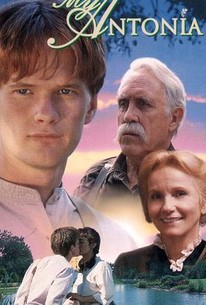 Made for the USA Network, this first film adaptation of Willa Cather's classic novel is a coming-of-age story of set in 1880s Nebraska. Orphaned after his parents die in a smallpox epidemic in Virginia, the teenaged Jimmy Burden (Neil Patrick Harris) moves to the farm of his grandparents (Jason Robards, Eva Marie Saint) outside Black Hawk, Nebraska. Their neighbors, newly arrived from Bohemia, are the Shimerda family, and Jimmy instantly becomes friends with the family's 15-year-old daughter, Antonia (Elina Lowensohn). He's pulled in two directions; her father wants him to teach her English, but his grandfather is wary of her distracting Jimmy from his own studies. After tragedy strikes the Shimerda family, Jimmy moves to town with his aging grandparents, who want to nurture his potential for becoming a university student and taking on a career. Antonia does come to work in town, thanks to the help of Jimmy's grandmother, but it's made clear to the young woman that she is not to distract Jimmy from his studies. Although Jimmy does go off to the state university in Lincoln and eventually Harvard Law School, he and Antonia maintain their friendship, understanding that the bond they formed as adolescents will endure.

Peggy Friesen
as A Woman

Joan Hennecke
as Another Woman

Tom Wees
as Conductor
View All

Critic Reviews for My Antonia

Audience Reviews for My Antonia

There are no featured audience reviews for My Antonia at this time.