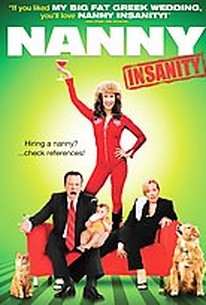 Two happily married expectant parents get more than they bargained for after hiring a free-spirited Ukrainian housekeeper to help clean up their suburban palace in Killer Wave director Kevin Connor's playful domestic comedy. Marsha and David McMillan (Cynthia Preston and Larry Dorf) are about to have their first child, yet despite their excitement at the prospect of becoming parents, their home is in a hopeless state of disarray. Realizing that their only hope for tidying up before the big arrival is to hire an experienced housekeeper, Marsha and David agree to give the job to voluptuous Ukranian Sophia Petrenko (Alla Korot). When the infectiously friendly housekeeper begins inviting her relatives from the old country to come experience the good life in America, however, Marsha and David find their home overtaken by strangers just at the time when it should be getting baby-proofed. Mindy Sterling, Howard Hesseman, Richard Riehle, and Roddy Piper co-star.

Richard Riehle
as Sam the Mailman

There are no critic reviews yet for Nanny Insanity. Keep checking Rotten Tomatoes for updates!

There are no featured audience reviews for Nanny Insanity at this time.