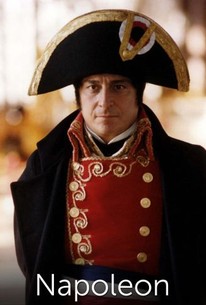 Filmed in France, Hungary, Austria, Czechoslovakia, Morocco, and Canada, this ambitious biographical TV miniseries chronicles the life and times of the "Little Corporal" from Corsica who managed to conquer nearly all of Europe within a period of a dozen years. The narrative begins in the mid-1790s, as Napoleon Bonaparte (played, curiously enough, by comic actor Christian Clavier) makes his mark on posterity with spectacular victories in Austria and Egypt. On the home front, Napoleon woos and wins the lovely (and considerably older) Josephine (Isabella Rossellini), but finds time for extracurricular romances with other women, notably Countess Marie Walewska (Alexandra Maria Lara). Ultimately, Bonaparte's ambitions destroy him, first in Russia, then at Waterloo, consigning the general-cum-emperor to live out his life in humiliation and exile. When originally broadcast in France in October 2002, Napoleon ran six hours (plus commercials), with four episodes. For its American presentation on the A&E cable network beginning April 8, 2003, the production was literally sliced in half, shown in two installments with a running time of three hours. What remained was all highlights and few insights, though a few brilliant moments remained, many of these supplied by the supporting cast, which included Gérard Depardieu (who also produced) as Fouche, and John Malkovich as Talleyrand. Thankfully, the full six-hour version was made available in the U.S. on DVD and VHS in 2003.

Toby Stephens
as Tsar Alexander I

There are no featured audience reviews for Napoleon at this time.