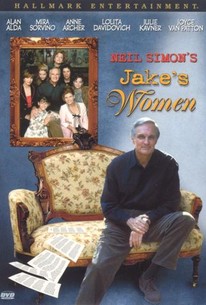 When the pressures of day-to-day life become too much to bear for a writer who claims that his mind has a mind of its own, he retreats into a fantasy world of his own creation in this touching comedy drama from Pulitzer prize-winning playwright Neil Simon. To Jake (Alan Alda), a day spent writing is a not so much work as it is a chance to escape the many strains of modern living. Though his rich fantasy world frequently seeps into his hectic reality, Jake often finds that life's truths are best revealed when he simply allows his imagination to wander - especially when dealing with the opposite sex. As the characters he creates become as real to Jake as the people closest to him, his hyperactive mind affords him the luxury of viewing life's troubles from a new and unique perspective.

Hynden Walch
as Server
View All

There are no critic reviews yet for Neil Simon's 'Jake's Women'. Keep checking Rotten Tomatoes for updates!

There are no featured audience reviews for Neil Simon's 'Jake's Women' at this time.