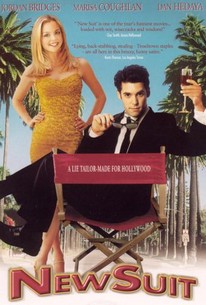 A guy looking for a break in the movie biz discovers the power of word of mouth in this satirical comedy. Kevin Taylor (Jordan Bridges) is an aspiring screenwriter who has pulled up stakes and moved to Los Angeles to pursue his dream. While working a day job, Kevin meets Marianne Roxbury (Marisa Coughlan), who is trying to work her way up the Hollywood ladder as a production executive. Biz-savvy Marianne advises Kevin that it makes more sense to spend his days schmoozing and making contacts rather than writing if he actually wants to get paid for his work and see it on a screen. With this in mind, Kevin takes a job as an assistant to Muster Hansau (Dan Hedaya), a once-powerful producer whose career is in a downward spiral. Kevin comes to realize he's merely a glorified errand boy for a washed-up blowhard, and the only people he meets are fellow lackeys with little real pull in the business, so he decides to have some fun and starts talking up a screenplay called "The New Suit" by Jordan Strawberry, even though both the script and the writer exist only in his imagination. Not wanting to sound out of the loop, no one admits they don't know anything about Strawberry and his work, and before long gossip has turned "The New Suit" into the most sought-after project in town, and Kevin finds himself controlling the destiny of a hot new writer who doesn't exist. The first American film from French director François Velle, New Suit also features Heather Donahue, Paul McCrane, and Amber Smith.

Amber Smith
as Jennifer
View All

There are no featured audience reviews for New Suit at this time.