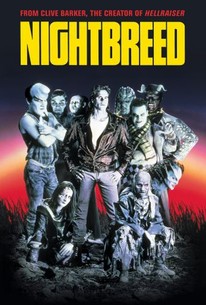 Multimedia horror maven Clive Barker followed the success of his feature directorial debut, Hellraiser, with this equally surreal effort, based on his novella Cabal. The story involves the plight of Aaron Boone (Craig Sheffer), a young man tormented by visions of monstrous, graveyard-dwelling creatures. Seeking the aid of his clinically cold therapist Dr. Decker (played by Canadian horror auteur David Cronenberg) in deciphering his nightmares, Boone becomes convinced that his frequent blackouts are linked to a recent spate of mutilation murders in the area. His frantic search for the truth leads him to the subterranean city of Midian, the dwelling place of a mythical race of undead nocturnal monsters known as the "Nightbreed." But it is only after he is cornered and shot dead by police that Boone's real journey begins -- he finds himself resurrected as one of the Breed. Though Barker's unique and graphic vision is somewhat blunted by choppy editing (thanks to relentless tampering from the studio), this is nevertheless a fine sophomore project from a talented storyteller; the central conceit of presenting the monsters as the "good guys" -- at least compared to the gun-and-bible-toting lunatics who hunt them -- is handled with verve and originality. ~ Cavett Binion, Rovi

David Young
as Otis and Clay

Nicholas Vince
as Kinski
View All