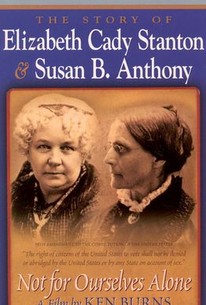 Not For Ourselves Alone

Not For Ourselves Alone Ratings & Reviews Explanation

Upon finding a written biography of pioneering women's rights activist Elizabeth Cady Stanton, film producers Paul Barnes and Ken Burns (director of "The Civil War") were shocked and outraged that her story -- which is also that of Stanton's longtime friend and political partner Susan B. Anthony -- had been almost entirely omitted from their history courses. So together they began work on Not For Ourselves Alone: the story of Elizabeth Cady Stanton and Susan B. Anthony, a groundbreaking look at one of the greatest untold chapters in American history. Over a span of more than fifty years, Stanton and Anthony struggled ceaselessly to organize a movement for basic rights that would not be won until after their deaths. Their story is the story of freedom fighters everywhere, complete with tragedies, triumphs, and unconquerable hope -- but it is also the story of two passionate and talented women, whose close friendship sustained them in times of loneliness and despair. An unforgettably personal, inside look at the birth of the modern women's movement, this film is at once a study of where we have been and a profound reflection upon who and where we still are. Ideal for classroom and educational use.

Julie Harris
as Susan B. Anthony

Critic Reviews for Not For Ourselves Alone

There are no critic reviews yet for Not For Ourselves Alone. Keep checking Rotten Tomatoes for updates!

Audience Reviews for Not For Ourselves Alone

There are no featured audience reviews for Not For Ourselves Alone at this time.

Not For Ourselves Alone Quotes