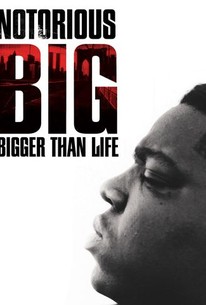 Hip hop fans know just what a remarkable impact the late Notorious B.I.G. had on the world of modern music, and in this documentary filmmakers come closer to uncovering the man behind the myth than ever before. His loose, silky smooth flow and unique rhyme style made him stand well apart from the pack, yet despite his success Notorious B.I.G. would eventually become an unfortunate victim of the violent East Coast-West Coast hip-hop feud. With seldom seen home video footage, newly-released interview captured shortly before his death, footage of the crime scene, and recollections from such close friends and collaborators as Easy Mo Bee, Raekwon, Ditty, and Method Man, this comprehensive portrait of a hip hop superstar will have fans dusting off their old copies of Life After Death for another, nostalgic listen.

There are no critic reviews yet for Notorious B.I.G.: Bigger Than Life. Keep checking Rotten Tomatoes for updates!

There are no featured audience reviews for Notorious B.I.G.: Bigger Than Life at this time.