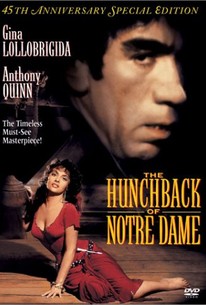 Better known as The Hunchback of Notre Dame, this opulent French production is the second talkie version of Victor Hugo's famous novel. Buried under mounds of latex, Anthony Quinn does his best as the deformed bellringer Quasimodo, though he comes off more as a punchdrunk ex-pug than a literal interpretation of Hugo's tragic protagonist. Somewhat more effective within the film's framework is Gina Lollobrigida as gypsy dancing girl Esmerelda, whose friendship with Quasimodo motivates the story. As in previous adaptations of the Hugo novel, the villain Frolio (Alain Cluny), originally a priest, is given a less-controversial station in life: in this case, he is an alchemist rather than a man of the cloth. Otherwise, Notre Dame de Paris is one of the more faithful renditions of the original novel, even unto retaining Hugo's unhappy ending. When first released in the U.S. by Allied Artists, the film was titled Hunchback of Paris, to avoid a copyright conflict with RKO's 1939 adaptation of Hunchback of Notre Dame.

Pierre Pieral
as The Dwarf

Camille Guerini
as The President

Boris Vian
as The Cardinal

There are no critic reviews yet for Notre Dame de Paris (The Hunchback of Notre Dame). Keep checking Rotten Tomatoes for updates!

There are no featured audience reviews for Notre Dame de Paris (The Hunchback of Notre Dame) at this time.