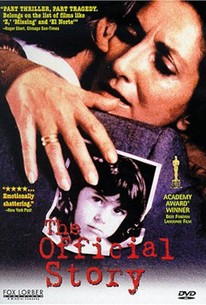 This is an emotionally gripping, fictional look at a couple torn apart by the infamous Argentine campaign of killings and torture that sent thousands of accused terrorists to unmarked graves in the mid-and late-'70s. Alicia (Norma Aleandro) and Roberto (Hector Alterio) adopted a little girl (Analia Castro) during this period of governmental terror in Argentina. Alicia has always wondered about the parents of their little girl, a topic her husband has forced her into forgetting as a condition of the adoption -- he alone knows the full story. Thanks to censorship, Alicia -- like others -- is not fully aware of how much killing has gone on until her students at school start complaining that their textbook histories were written by murderers. Add to this a long conversation with a friend who had been in exile after she was tortured by the government, and Alicia starts to do some serious political and personal research on her own. The results reveal the identity of the little girl's dead parents and reveal that Alicia's husband has had a nasty hand in the government repression and dirty dealings with foreign businesses. She also learns the identity of the girl's grandmother. Her next decision will determine what to do with this information.