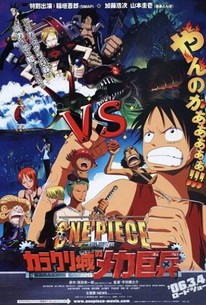 The Straw Hats visits an island, known as Mecha Island, where a fisherman sings an old folk song about a Golden Crown. Searching for that mysterious treasure, they find a hidden entrance into the island. The island's leader, Ratchet, impressed with the find and in search of the Golden Crown himself, invites the crew to join him in his search and the crew along with Ratchet and his henchmen enter the cave. As it turns out, the islands true form, is that of a giant turtle. Ratchet, who had known this all along, uses his mechanical castle to take control of the turtle, in order to use it, to take over the world. Now the Straw Hats have to stop not only Ratchet, but also the helpless turtle, from crashing into a nearby island.

There are no critic reviews yet for One Piece - Karakuri Castle's Mecha Giant Soldier (One piece: Karakuri shiro no Mecha Kyohei). Keep checking Rotten Tomatoes for updates!

There are no featured audience reviews for One Piece - Karakuri Castle's Mecha Giant Soldier (One piece: Karakuri shiro no Mecha Kyohei) at this time.