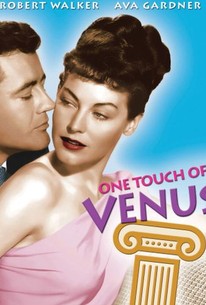 One Touch of Venus

The spirit of love is back, and she's working in retail in this bubbly romantic musical comedy. Eddie Hatch (Robert Walker) is a window dresser at a large department store; he's become especially fond of one of his mannequins who looks like the sort of girl he'd like to meet, and one night he impulsively gives the dummy a kiss. To his tremendous surprise, the mannequin comes to life, and it turns out to be inhabited by the spirit of Venus, the Goddess of Love (Ava Gardner). Suddenly, romance is in the air as Eddie's fellow employees throw caution to the wind and finally express their infatuations with their co-workers; however, Eddie is too intimidated to follow through on his feelings for Venus, even though she'll only be in human form for 24 hours. Adapted from a popular Broadway musical, One Touch of Venus features a number of memorable songs by Kurt Weill and Ogden Nash, including "Speak Low" and "The Trouble with Women," though a number of other songs they wrote for the stage production were replaced for the film.

Pat Parrish
as Girl
View All

Critic Reviews for One Touch of Venus

There are no critic reviews yet for One Touch of Venus. Keep checking Rotten Tomatoes for updates!

Audience Reviews for One Touch of Venus

One Touch of Venus Quotes