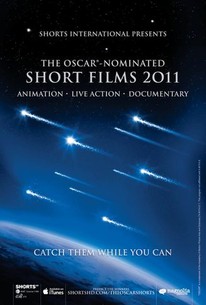 Three theatrical programmes will give audiences around the country an opportunity to watch the nominated shorts in the Animation, Live Action and Documentary categories prior to the 83rd Academy Awards (R) ceremony on February 27th. This year will mark the inaugural theatrical outing for the nominated Documentary shorts. The Oscar (R) Nominated Short Films has become a key fixture of the awards season. Last year the release exceeded the million-dollar mark at the US box office, charting a spectacular 289% growth in attendance since its inception in 2005. Along with the theatrical run, the nominated short films will be released individually on iTunes from February 22nd in the US, Canada, UK, France, Germany and other iTunes Stores throughout the world. The release will also be available via cable's Movies On Demand (MOD), distributed by leading MOD distributor, iN DEMAND L.L.C. "The Oscar (R) Nominated Short Films are some of this years best entertainment. They're made by the worlds stand-out, emerging filmmakers and represent the cutting edge of entertainment," said Carter Pilcher, Chief Executive of Shorts International. "Audiences this year will experience intense emotional highs, laugh-out-loud comedies and brilliant insights, all in the space of 90 minutes." "The only way to improve your handicap come Oscar (R) night, is to catch these incredible short film nominees," said Tom Quinn, SVP of Magnolia Pictures. -- (C) Shorts International THE CONFESSION; United Kingdom; Oscar Nominee: Tanel Toom. Quiet and sincere, 9-year-old Sam is worried about making his first confession at church. As his conscience is clear, he therefore cannot hope for any relief from the experience. He and his friend Jacob decide to remedy that situation, but their initially innocent prank turns unexpectedly tragic. (26 min.) THE CRUSH; Ireland; Oscar Nominee: Michael Creagh. An 8-year-old schoolboy is so besotted with his teacher that he challenges her boyfriend to a duel to the death. (15 min.) GOD OF LOVE; USA; Oscar Nominee: Luke Matheny. Lounge-singing darts champion Raymond Goodfellow finds his prayers are answered -- literally -- when he receives a mysterious package of passion-inducing darts. The catch is that the one woman he loves -- Kelly, a drummer in his band -- is already in love with Ray's best friend Fozzie, the guitarist in the band. But when Ray uses the darts in a loony scheme to resolve this strange romantic triangle, he learns a surprising lesson about unrequited love and discovers his own place in the universe. Romance is in the air in this bohemian charmer. (18 min.) NA WEWE; Belgium; Oscar Nominee: Ivan Goldschmidt. 1994: There is civil war in Burundi, a small country of Central Africa directly bordering Rwanda. A near genocidal confrontation opposes rebels mainly composed of ethnic Hutus and a national army with a majority of Tutsis. This short film relates a sadly frequent episode of this fratricidal conflict: the attack by rebels of a minivan carrying ordinary citizens. A Kalashnikov bursts out. The bus stops, the passengers get off. An order is barked: "Hutus to the left, Tutsis to the right!" The sorting out begins. But who is a Hutu, who is a Tutsi? This story is entirely based on real people and situations. It was written by a person who has lived in the beauty of Burundi and suffered its horrors. With emotion, suspense and humor it exposes the absurdity of ethnic and racial strife. "NA WEWE" (pronounce "Na wayway") means "You too" in Kirundi. (19 min.) WISH 143; United Kingdom; Oscar Nominees: Ian Barnes and Samantha Waite. A fifteen-year-old boy with only months to live is granted one wish from the Dreamscape Charity. But David doesn't want to go to Disneyland or meet Gary Neville; what he really wants is an hour alone with a naked woman. (24 min.) -- (C) Magnolia

Critics Consensus: Journey 2 Isn’t Quite Worth the Trip
View All

There are no featured audience reviews for Oscar Nominated Live Action Shorts 2012 at this time.