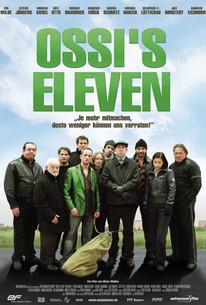 This is the funny German version of the social comedy Ocean`s Eleven. Eleven accomplices from the eastern part of Germany ("Ossi" is slang for an East German citizen) get together to plan a new and huge criminal act, although the head of them, Oswald Richter (Tim Wilde), just got out of prison. But they have a problem. The casinos they desired to break in to already went bankcruptcy, thus a new plan has to be made. Their next idea is to steal money from an iron foundry, who still owns bills of the former currency, German Marks. Later, this should be exchanged into EURO at a federal bank. But the theory sounds far easier than reality is in the end. The crew, which consists of a former top-notch world class canoeist, Bruno, a fast food store owner, Axel, and a kid that thinks he is Elvis, Timmy, is lucky to find out that one of them has a grandfather who knows about the old tunnel system under the iron foundry. The problematic journey begins and holds unexpected obstacles.

There are no critic reviews yet for Ossi`s Eleven . Keep checking Rotten Tomatoes for updates!

There are no featured audience reviews for Ossi`s Eleven at this time.