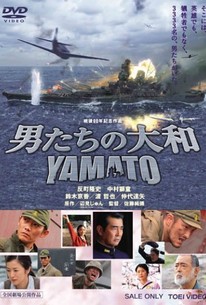 Makiko Uchida arrives in a southern Japanese port hoping to find a boat that will take her to the final resting place of the Battleship Yamato on the 60th anniversary of its sinking. She is rebuffed by all until she reveals to Katsumi Kamio that she is the daughter of Petty Officer Uchida. Kamio is surprised for he thought unlike himself, Uchida had been lost when the Yamato was besieged and sunk on April 7, 1945 by American aircraft which prevented its fulfilling a final suicide mission against the American fleet battling to capture Okinawa. Kamio and Uchida were part of a close set of comrades that proudly and bravely served on board this, the largest battleship ever constructed. He agrees to journey with Makiko with only the help of Atsushi, a 15 year old deckhand. As he pilots the way throughout the rough 15 hour journey Kamio reminiscences about life aboard the Yamato during the war and also about the sailor's mothers and girlfriends left back home.

Critic Reviews for Otoko-tachi no Yamato

There are no critic reviews yet for Otoko-tachi no Yamato. Keep checking Rotten Tomatoes for updates!

Audience Reviews for Otoko-tachi no Yamato

There are no featured audience reviews for Otoko-tachi no Yamato at this time.