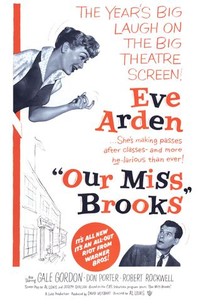 Our Miss Brooks had been a radio and TV sitcom hit thanks to the considerable input of star Eve Arden. The film version of Our Miss Brooks was not quite as successful (why pay for something that you can get at home every week for free?), but it admirably captures the spirit of the original audio and video versions. As ever, high school teacher Connie Brooks (Arden) carries a torch for handsome but clueless biology professor Phillip Boynton (Robert Rockwell, taking over a role created for radio by Jeff Chandler). Connie is finally able to arouse Boynton's attention when she is courted by the father (Don Porter) of a student (Nick Adams) she is tutoring. A subplot involving petty crime can easily be ignored, but there's no avoiding the hilarious fingernails-on-the-blackboard rendition of It's Magic sung by the adenoidal Walter Denton (Richard Crenna). And of course, there's principal Osgood Conklin (Gale Gordon), blowing his top at the slightest provocation. Our Miss Brooks was directed by Al Lewis, who was the chief writer for the radio and TV editions of the property. ~ Hal Erickson, Rovi

Frank Mitchell
as Reporter
View All

Critic Reviews for Our Miss Brooks

Audience Reviews for Our Miss Brooks

There are no featured audience reviews for Our Miss Brooks at this time.