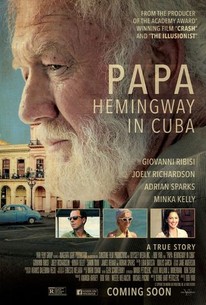 A man can be destroyed but not defeated, although the desultory Papa: Hemingway in Cuba makes one feel as if both can be accomplished by watching a single film.

The first Hollywood film to shoot on location in Cuba since the 1959 revolution, PAPA: Hemingway in Cuba is the true-life story of a young journalist who finds a father figure in legendary author Ernest Hemingway. Their relationship began in the late 1950's when Ed Myers, then a junior reporter at The Miami Herald, wrote a fan letter to his idol. Myers thought he was being pranked when the larger than life Hemingway phoned the newsroom a week later, inviting him to Havana. "Good letter, kid," the famous voice growled. "You like to fish?" Hidden away at his private estate with his wife Mary, the elusive author mentors Myers in fishing, drinking, and finding his voice while the Cuban Revolution boils up around them. In this turbulent landscape, observing an icon in his twilight years, Myers discovers his strength while recognizing that all of our heroes are human.

Nico Ciccone-Scott
as Ed Myers at 4

Chad Roberts
as Ed Myers at 14

Faith Busby
as Mom with Stroller

Joe Newberry
as Dad with Stroller

Kim Evans
as Woman on Sidewalk

Hunter Goodgion
as Man on Sidewalk

Robert Bjorklund
as Cop
View All

Mother’s Day Is a Star-Studded Dud
View All

There are no featured audience reviews for Papa: Hemingway in Cuba at this time.