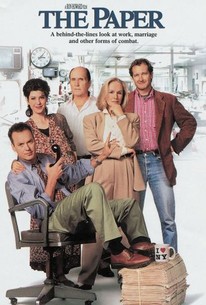 Fast and frenetic, The Paper captures the energy of the newsroom thanks to its cast and director on first-rate form.

Director Ron Howard's drama follows a beleaguered reporter during a hectic 24 hours at a New York City tabloid. Michael Keaton stars as Henry Hackett, a metro editor for the struggling New York Sun. Hackett is being wooed by the Sentinel, a more upscale paper, but he's addicted to the adrenaline-stimulating, breakneck pace of the Sun's newsroom, much to the consternation of his pregnant wife Martha (Marisa Tomei. Hackett is currently pursuing a story of two minority youths who have been arrested for the murders of two men. He learns that the police think that the killings may be a mob hit. In the court of public opinion, however, the innocent suspects are being judged as guilty, and the police may bow to the pressure. As Hackett and his staff desperately work all the story's angles to find the truth, several other dramas unfold. Top editor Bernie (Robert Duvall) learns that he has prostate cancer, and tough publisher Alicia (Glenn Close) wonders if her lack of popularity is due to her cost-cutting, her personality, or the fact that she's a woman. In their only collaboration, screenwriter David Koepp co-wrote the script with his brother Stephen Koepp, a senior editor at Time magazine.

Jack A. O'Connell
as Press Operator

Rosanna Scotto
as Herself

Donna Hanover
as Herself

Jane Hanson
as Herself

Valerie Coleman
as Herself

Chuck Scarborough
as Himself

Brenda Blackmon
as Herself

Cynthia Carter
as Herself

Graydon Carter
as Himself

Lou Colasuonno
as Himself

Bob Costas
as Himself

Larry Hackett
as Himself

Hap Hairston
as Himself

Pete Hamill
as Himself

William Kunstler
as Himself

Mike McAlary
as Himself

Joanna Molloy
as Herself

Richard Price
as Himself

John Rhodes Sturdy
as Himself

Jerry Rosa
as Himself

Linda Stasi
as Herself

Dini Von Mueffling
as Herself

Jeannie Williams
as Herself

John Miller
as Himself

Debbie Gross
as Herself
View All

News & Interviews for The Paper

Critic Reviews for The Paper

Audience Reviews for The Paper