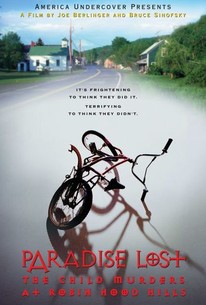 This nonjudgmental documentary examines a bizarre triple murder and the subsequent arrest, trial and dubious convictions of three teenage boys for the crime. In a peaceful Arkansas suburb, three eight-year-old boys are found maimed and brutally slain -- one of them was castrated. The community understandably goes into an uproar until one, mentally slow teen, Jason, comes forward and claims that he and two others killed the boys as part of a Satanic ritual. All are arrested, but the other teens, Damien and Jason, swear that they are innocent. The filmmakers then present widely disparate opinions from community members concerning the youths' guilt or innocence. The stepfather of one of the slain boys, vents his feelings by speaking to a pumpkin and then blowing it away with a gun. The whole trial is suspect and is based upon the testimony of Jesse who has an IQ of 74 and cannot keep his story straight. There is little evidence to conclusively prove or disprove their guilt. The filmmakers also intimate that others may have been involved, but those possibilities remain largely unexplored. The three boys all ended up convicted, but the niggling doubts remain.