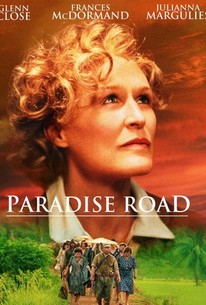 Based on the testimony of survivors, this historical drama recounts the WWII heroism of female prisoners of war. (Glenn Close) stars as Adrienne Partiger, a society doyenne who flees Singapore with other expatriate women, mostly the wives of servicemen, when Japanese forces invade in 1942. When their gunboat is sunk in an air attack, the survivors wash ashore on Japanese-held Sumatra. The women are interned in a grim POW camp where punishments for even minor infractions are extreme. With the help of a missionary (Pauline Collins), Partiger corrals the women, including a tough American (Julianna Margulies), an Australian nurse (Cate Blanchett) and a young wife (Jennifer Ehle) into a musical group. Since singing is not allowed, the a cappella chorus dubs itself "a vocal orchestra" and is tolerated -- if barely -- by their Japanese captors. Though living conditions are squalid, food is scarce, and a thin sliver of soap inspires a shower brawl, the music keeps spirits uplifted and a Jewish-German doctor (Frances McDormand) provides some medical aid. Writer-director Bruce Beresford interviewed real-life participants in similar POW musical groups. Some provided, from memory, sheet music of the pieces they performed, which were used in the film. ~ Karl Williams, Rovi

Clyde Kusatsu
as The Snake

Julie Anthony
as Singer at Raffles