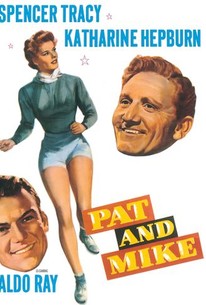 Katharine Hepburn and Spencer Tracy take competition to a romantic-comic highpoint in this elegantly directed sports comedy by George Cukor.

Pat (Katharine Hepburn), a college phys-ed instructor, enters into professional competition as a golf and tennis player. Mike (Spencer Tracy), a likeable but unscrupulous sports promoter, first attempts to bribe Pat to lose, but later becomes her manager. Pat performs brilliantly until her insufferable fiance Collier West (William Ching) shows up; West always manages to make Pat so nervous that she can't win to save her life. At long last, West walks out, having found Pat in a compromising situation with Mike. Though she'd previously kept her distance from Mike, Pat suddenly realizes that she's fallen in love with him and--after a few crooked gamblers are disposed of--Pat and Mike become partners on a permanent basis. Pat & Mike reunited Tracy and Hepburn with their favorite director, George Cukor, and their favorite scenarists, Ruth Gordon and Garson Kanin. Watch for real-life golf and tennis champs Gussie Moran, Babe Didrickson Zaharias, Don Budge, Alice Marble, Frank Parker, Betty Hicks, Helen Dettweilerand Beverly Hanson as "themselves" -- and also keep an eye out for ex-ballplayer Chuck Connors, making his acting debut as a highway patrolman.

William Self
as Pat's Caddy

Bill Self
as Pat's Caddy

Don Budge
as Himself

Helen Dettweiler
as Herself

Betty Hicks
as Herself

Beverly Hanson
as Herself

Babe Didrikson Zaharias
as Herself

Pancho Gonzalez
as Himself

Gussie Moran
as Herself

Alice Marble
as Herself

Franklin Parker
as Himself

Cameron A. Grant
as Reporter

Sam Hearn
as Lawyer
View All

Critic Reviews for Pat and Mike

Audience Reviews for Pat and Mike