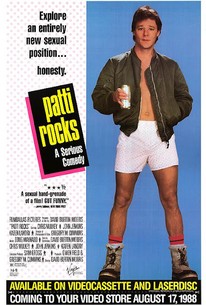 A macho misogynist meets his match in this independent comedy-drama. Shortly before Christmas, Eddie Jenks (John Jenkins) gets a call from his old friend Billy Regis (Chris Mulkey). Billy has just learned that his girlfriend Patti Rocks (Karen Landry) is pregnant; Patti doesn't know that Billy already has a wife and two kids, and Billy wants Eddie to lend moral support for what he expects to be an ugly scene when he breaks the news to her. Over the course of a long drive, Billy regales Eddie at great length with his low opinion of women in general and Patti in particular, but when Eddie finally encounters Patti in the flesh, he discovers an intelligent, down-to-earth woman rather than the slatternly slob he'd been led to expect. As it turns out, Patti already figured out that Billy was married, wants no help from him in raising the child (which she intends to keep), and refuses to be apologetic about pursuing sex when she wants it, the same way a man would. Chris Mulkey and John Jenkins previously appeared as Billy and Eddie in David Burton Morris's 1975 feature Loose Ends.

May Mayhew
View All

There are no featured audience reviews for Patti Rocks at this time.