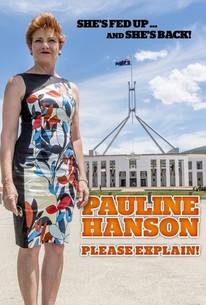 Director Anna Broinowski explores how Pauline Hanson's speech in 1996 and the decades of debate that followed has influenced Australia today the impact of her political career on modern multicultural Australia, and the people who have helped her transition from local fish shop owner to Member for Oxley. Featuring many of Hanson's critics, opponents, advisors and commentators, from former Prime Minister John Howard, to current members of the media, including Margo Kingston and Alan Jones and leading Indigenous commentator, Professor Marcia Langton.

There are no featured audience reviews for Pauline Hanson: Please Explain! at this time.