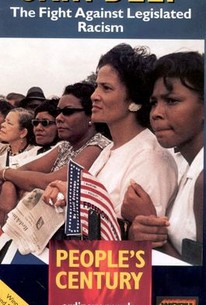 This video is part of a PBS series that chronicles some of the important political movements of the 20th century. The subject of this volume is the fight for social equality for Blacks in America and South Africa. The march on Selma, lunch counter sit-ins, and voter registration demonstrations led to the 1964 Civil Rights Act and the Voter Registration Act in America. In South Africa, demonstrations against apartheid, culminating in the Soweto uprising, led to the release of African National Congress leader Nelson Mandela, and led to free elections in that country. Archival film footage and interviews illustrate the stories.

There are no critic reviews yet for People's Century: 1900-1999. Keep checking Rotten Tomatoes for updates!

There are no featured audience reviews for People's Century: 1900-1999 at this time.