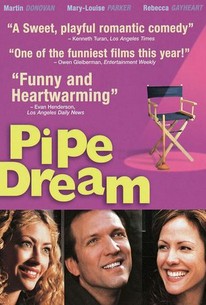 A plumber looking for love hopes to find romance by impersonating a movie director in this offbeat independent comedy. David Kulovic (Martin Donovan) is a single guy who doesn't have much luck impressing the ladies, a dilemma he attributes to the poor opinion most people have of his trade, plumbing. One day, David is mistaken for a well-known film director, and discovers people, especially women, seem a great deal more friendly toward him when they think he works in the movies. David's case of mistaken identity gives him a brainstorm, and with the help of his pal R.J. (Kevin Carroll), he decides to pass himself off as a struggling independent filmmaker, hoping to meet aspiring actresses at his bogus casting calls. Of course, a filmmaker needs a script, and David swipes one from one of his neighbors, Toni Edelman (Mary-Louise Parker, who is trying to get her own foot in the door of the film business). As it happens, Toni's screenplay happens to be quite good, and soon David's nonexistent project is developing a very real buzz in indie film circles. Seeing this as her big chance at a career in Hollywood, Toni begins coaching David in how to act like a filmmaker in the hopes they can actually get David's phantom picture off the ground. Writer and director John C. Walsh based Pipe Dream in part on his own experiences as he was making his first feature film, Ed's Next Move.

Natalie B. Pyper
as Melanie Phillips

Kelly De Martino
as Extra No. 1

Mitch Roberson
as Extra No. 2

Michael Kaycheck
as Manny
View All