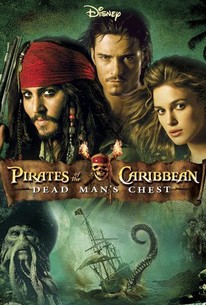 Gone is Depp's unpredictability and much of the humor and originality of the first movie.

Captain Jack Sparrow is caught up in another tangled web of supernatural intrigue. Although the curse of the Black Pearl has been lifted, an even more terrifying threat looms over its captain and scurvy crew: it turns out that Jack owes a blood debt to the legendary Davy Jones, Ruler of the Ocean Depths, who captains the ghostly Flying Dutchman, which no other ship can match in speed and stealth. Unless the ever-crafty Jack figures a cunning way out of this Faustian pact, he will be cursed to an afterlife of eternal servitude and damnation in the service of Jones. This startling development interrupts the wedding plans of Will Turner and Elizabeth Swann, who once again find themselves thrust into Jack's misadventures, leading to escalating confrontations with sea monsters, very unfriendly islanders, flamboyant soothsayer Tia Dalma and even the mysterious appearance of Will's long-lost father, Bootstrap Bill. Meanwhile, ruthless pirate hunter Lord Cutler Beckett of the East India Trading Company sets his sights on retrieving the fabled "Dead Man's Chest." According to legend, whoever possesses the Dead Man's Chest gains control of Davy Jones, and Beckett intends to use this awesome power to destroy every last Pirate of the Caribbean once and for all. For times are changing on the high seas, with businessmen and bureaucrats becoming the true pirates--and freewheeling, fun-loving buccaneers like Jack and his crew threatened with extinction.

David Zahedian
as Turkish Guard No. 2

Faouzi Brahimi
as Turkish Guard No. 3

News & Interviews for Pirates of the Caribbean: Dead Man's Chest

The 50 Highest-Grossing Movies of All Time: Your Top Box Office Earners Ever Worldwide
30 Great Scenes in Rotten Movies
10 Movie- and TV-Based Video Games That Dazzled E3 Goers
View All

Critic Reviews for Pirates of the Caribbean: Dead Man's Chest

Audience Reviews for Pirates of the Caribbean: Dead Man's Chest