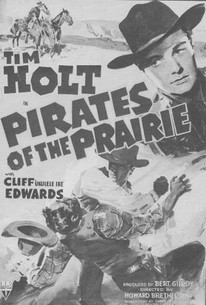 Pirates of the Prairie

In one of his better early Westerns, Tim Holt, as Deputy Marshal Larry Durant, is sent to Spencerville where a gang of vigilantes has been terrorizing the citizenry. Going undercover as a gunsmith, Larry quickly learns that the leader of the vigilantes, John Spencer (John Elliott), is an honest man who only seeks to establish law and order. The real brains behind the crimes, meanwhile, are revealed to be Spencer's brother-in-law, Lou Harmon (Roy Barcroft), and his chief henchman, Leighton (Charles King), who speculate in the coming of the railroad by forcing the townspeople to relinquish their land. When Harmon learns from innocent tattle-tale Ike (Cliff Edwards) that the railroad will be bypassing Spencerville in favor of neighboring East Spencerville, the vigilantes shift their operations to that community. Spencer is killed by Leighton in the ensuing melee but with the assistance of the East Spencerville townspeople, Larry manages to trap Harmon and his gang in the local saloon. When not making life difficult for Tim Holt, comedy relief Cliff Edwards performs "Grandpap" and "Where the Mountain Meets the Sunset," both by Fred Rose and Ray Whitley. Pirates of the Prairie was a remake of Legion of the Lawless, a '40s Western starring Tim Holt's predecessor at RKO, George O'Brien.

Bill Wolfe
as Townsman
View All

Critic Reviews for Pirates of the Prairie

There are no critic reviews yet for Pirates of the Prairie. Keep checking Rotten Tomatoes for updates!

Audience Reviews for Pirates of the Prairie

There are no featured audience reviews for Pirates of the Prairie at this time.

Pirates of the Prairie Quotes