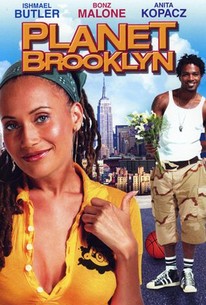 Mad Matthewz makes his feature debut as a writer/director with Men Without Jobs. Ish (Ishmael Butler, formerly of the jazz-influenced rap group Digable Planets) and Oz (Bonz Malone of Slam) are roommates scrounging by in Brooklyn, barely scraping the rent together each month, and ignoring their bills. They spend their days hanging out, smoking, drinking, and playing video games. Ish wants to make it in the music biz, while Oz watches daytime cooking shows and puts his culinary skills to work impressing the grandmother of his young daughter, in hopes that his little girl will eventually come to live with him. Occasionally they visit their favorite record store, where Ish plans to buy rare R&B records when he gets some money, and peppers the proprietor with potential band names. Their pal Junie (Andre Royo of HBO's The Wire) frequently pops by, begging to be in their as yet unformed band, bragging about his beats, and lying about meetings with famous producers. Ish makes regular visits to his parents' house, but only when they aren't home. He raids the fridge and borrows his dad's (Reg E. Cathey) old records. One day, Ish meets Veronica (Anita Kopacz), a pretty young woman who shares his interest in graffiti and music. Veronica encourages Ish's creative ambitions, but his reluctance to take the next step -- to actually follow through on his dreams -- threatens their relationship. Oz, meanwhile, gambles his way into trouble with some local thugs. When he goes on the run, Ish and Veronica decide to go with him. Men Without Jobs had its world premiere at the 2004 Tribeca Film Festival.

Roberta Wallach
as Dolores
View All

Critic Reviews for Men Without Jobs

There are no critic reviews yet for Men Without Jobs. Keep checking Rotten Tomatoes for updates!

Audience Reviews for Men Without Jobs

There are no featured audience reviews for Men Without Jobs at this time.