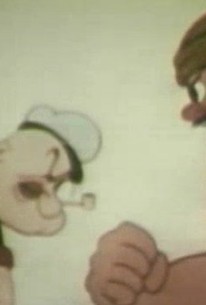 The second two-reeler Popeye cartoon finds the spinach-promoting sailor as a member of the Coast Guard near an unspecified Arabian country. Having heard about the evil Abu Hassanand his forty thieves, Popeye sets off with Olive Oyl and Wimpy to bring them to justice. Unfortunately, they end up wandering in the desert, stricken by thirst and heat, and encountering several mirages and passing by dozens of skeletons before making their way to an actual town. Once there, Popeye and Olive seat themselves at an open air restaurant (while Wimpy goes for a more direct approach to his hunger). After ordering and being served the special of the day (bacon and eggs), they are all set to dig in when Hassan and his cutthroats appear, taking everything in sight. The frightened restauranteur reclaims the meal he has just laid for Popeye and Olive before they can take a bite, and the thieves also make away with the hot dogs Wimpy has discovered. Popeye puts up a fight, but is temporarily defeated. Hassan takes Olive and Wimpy back to his cave, where the former becomes an overworked laundress and the latter is wrapped in chains and forced to watch Hussan eat a delectable lunch. Popeye follows the thieves but is captured and dangled above a man-eating fish in an underground lake. Taking advantage of the powers provided him by spinach, he defeats the fish and "licks the forty," proving once again that he is the mightiest sailor of them all.

There are no critic reviews yet for Popeye the Sailor Meets Ali Baba's 40 Thieves. Keep checking Rotten Tomatoes for updates!

There are no featured audience reviews for Popeye the Sailor Meets Ali Baba's 40 Thieves at this time.