Portrait of a Beauty (Mi-in-do) 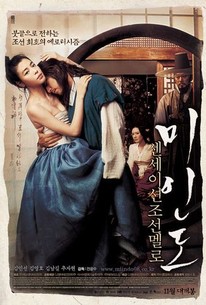 Portrait of a Beauty (Mi-in-do)

Portrait of a Beauty (Mi-in-do) Photos

A word of explanation for the unfamiliar: 18th century court painter Shin Yun-bok (who occasionally used the pseudonym Hyewon) was one of the most legendary artists in Korean history. He cultivated a particularly strong reputation on the basis of his erotic art, with explicit depictions of women widely branded obscene. Though no real historical evidence exists to support this claim, recent Korean writers have employed the conceit that Yun-bok was actually a woman disguised as a man; that idea first appeared in Lee Jeong-Myeong's novel Painter of the Wind, then in a television series, and then in this feature adaptation of the same book, helmed by Jeon Yoon-Su. In this chronicle, Yun-bok begins life as a young girl, Yun-jeong, with an extraordinary flair for painting. Unfortunately, the social constraints of the day prevent her from engaging in her heart's profession, but her brother is being prepped for life as a court painter. In desperation, Yun-jeong paints for him and allows her own work to masquerade as his. Then, when the brother commits suicide, Yun-jeong assumes his identity, disguises herself in male drag as Yun-bok, and lives as a male. This grows complicated once Yun-jeong falls deeply in love with a man, Kang-mu. Meanwhile, Yun-jeong's longtime instructor, Kim Hong-do, falls in love with her, and a courtesan named Seol-hwa falls helplessly into unrequited love with Kim -- prompting her to undertake an extreme and fatal act of jealous passion. Director Jeon Yoon-Su uses the tale to account for the existence of Shin Yun-bok's celebrated tableau "Portrait of a Beauty."

Critic Reviews for Portrait of a Beauty (Mi-in-do)

There are no critic reviews yet for Portrait of a Beauty (Mi-in-do). Keep checking Rotten Tomatoes for updates!

Audience Reviews for Portrait of a Beauty (Mi-in-do)

There are no featured audience reviews for Portrait of a Beauty (Mi-in-do) at this time.

Portrait of a Beauty (Mi-in-do) Quotes