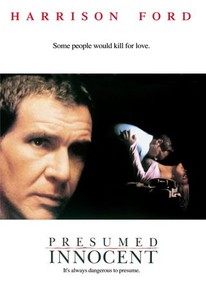 Thanks to an outstanding script, focused direction by Alan Pakula, and a riveting performance from Harrison Ford, Presumed Innocent is the kind of effective courtroom thriller most others aspire to be.

Rusty Sabich (Harrison Ford) is a bland, oppressed man who burns with a quiet, corrosive intensity that can flare uncontrollably. A Philadelphia prosecutor, Sabich's fire seems to have one outlet: his job. He loves prosecuting people. Otherwise, his life is dead-ended. He has a loveless marriage to a neurotic woman (Bonnie Bedelia) and an overbearing boss (Brian Dennehy) in a labyrinthine law enforcement world of corruption and twisted relationships. Then Carolyn Polhemus (Greta Scacchi) comes into his life. Lovely and seductive, Polhemus easily entices him to break his marital vows, but she schemes to get him to try for his boss' job. When he refuses, she leaves him. When she turns up dead, the victim of an apparent rape-murder, clues begin to point to Sabich. His blood type almost perfectly matches that in the semen found in the victim, carpet fibers at the crime scene match those found in his house, and most damning, his fingerprints are found on a beer glass in Polhemus' apartment. His protestations of innocence ignored, Sabich is put on trial for the murder and hires his biggest adversary (Raul Julia) to defend him. ~ Nick Sambides, Jr., Rovi

Ricky Rosa
as Camper
View All