The Prince and the Surfer 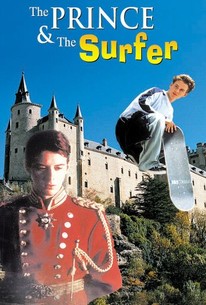 The Prince and the Surfer

The Prince and the Surfer Ratings & Reviews Explanation

The Prince and the Surfer Photos

Mark Twain's The Prince and the Pauper gets an update and an overhaul in this family-oriented comedy. "Cash" Canty (Sean Kellman) is a typical Southern California kid who likes surfing, skateboarding, and pretty much anything that can be described as "rad." Prince Edward of Gelfland is the heir to the throne of a small nation; he has a wealth, privilege, and retinue of minders, but he wishes that he could live like a normal guy for a change. Prince Edward also happens to look exactly like Cash (and is also played by Sean Kellman), and when the two bump into each other by accident while the Prince is on a visit to California, they get the idea of switching places. Edward gets to do all of the "normal person" things that he's kept away from by his staff, and Cash gets to live like a big shot, not to mention spending time with Galina (Katie Jane Johnson), a beautiful girl who is pledged to marry the Prince when he's of age. However, Edward learns that a commoner's life has its downside, and Cash discovers treachery among the keepers of the throne that must be revealed to Edward before it's too late. The Prince and the Surfer marked the directorial debut for actor Arye Gross; he also plays a small role, alongside Robert Englund, Timothy Bottoms, C. Thomas Howell and Jennifer O'Neill.

Critic Reviews for The Prince and the Surfer

Audience Reviews for The Prince and the Surfer

There are no featured audience reviews for The Prince and the Surfer at this time.

The Prince and the Surfer Quotes