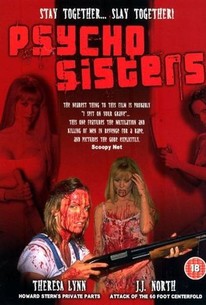 This is a gory, fairly enjoyable low-budget slasher movie about two sisters, Jackie (J.J. North) and Jane (Theresa Lynn), who are prematurely released from a mental hospital. They were gang-raped as teenagers, and their other sister Janice was murdered. The trauma has left the women as vicious serial killers who murder college boys in a small town, keeping their manhoods in jars in the kitchen cupboard. The murders are well-handled and extremely bloody, so gorehounds should be pleased. The humorous touches, including the bondage games played by the sisters' kinky neighbors, don't come off as well, and the scenes with Janice's ghost are fumbled and unclear. In the world of direct-to-video horror, however, one must be thankful for small things, like the engaging characters and some clever moments. Fans of bargain-basement splatter should check it out.

Peter Kerr
as Jack the Rapist

Chris Monroe
as Jack's Buddy No. 1

Joe Isabella
as Jack's Buddy No. 2

Dave DiVenti
as Guy in Car

Albie Miller
as Fraternity Boy No. 1

Dave Castiglione
as Fraternity Boy No. 2

Clancy McCauley
as Girl on TV No. 1

Launa Kane
as Girl on TV No. 2

Gary Whitson
as Guy Next Door

There are no critic reviews yet for Psycho Sisters. Keep checking Rotten Tomatoes for updates!

There are no featured audience reviews for Psycho Sisters at this time.